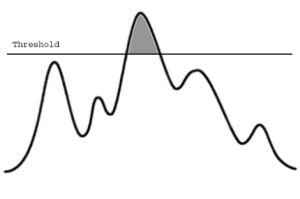 In medicine (and some other disciplines, I believe), there’s something called “threshold” in simple terms ( and I know ‘simple’ is relative), it is the point at which a stimulus first produces a sensation or the lowest limit that must be reached before an effect is produced. So we say things like “that guy has a high threshold for pain”, meaning its takes more for him to feel pain than it does for most people. So you get the point, I hope.

Anyway, this isn’t a medically oriented lecture (was that a sigh of relief?), it’s actually  about human kinetics!! Just kidding:). Its about you, me and life.

I realized that in this ever changing world as new generations sprout and grow our perception of what’s right and what’s not seems to be evolving. Things that were once taboos became minor sins, now they are tolerable and soon would become acceptable. Our threshold of perception of wrong seems to have increased (and is still increasing).

The young man stole, so what? He didnt kill anyone. So he smokes, at least it isn’t cocaine. So she dresses indecently, at least she’s not promiscuous. So he is gay, at least he’s not transgender. its an endless list of what’s wrong and what’s not so wrong.

But why? I ask. Why do we tolerate today things that were inconceivable yesterday. There might be a myraid of reasons, but one comes to mind-the power  of numbers. Some time ago, being homosexual was some sort of taboo, a man could hardly stand boldly and say “look here, I’m gay”, but as more people saw it as a way of life, it didn’t seem as bad as it did before, so even more people got involved, became bold and spoke out, and gradually the voice of sanity was drowned out.

The more people accept and potray these vices (particularly people we look up to; superstars, religious leaders etc.) the less abominable they appear and soon we wonder why we ever thought these things were wrong. This process is so subconcious that we dont even notice as our threshold rises higher and higher…..Now even the most insane things appear ‘ok’.

If you want to be among the generation of people with unequivocally low thresholds, these are my reccomendations.

1) Set a standard based God’s word, not on a man’s interpretation of it. Remember

Matthew 24:35
Heaven and earth will pass away, but my words will never pass away.

If God didn’t accept it a thousand years ago, he wont accept it now, not even if the whole world does (churches inclusive).

2) Keep watch on your heart.

Proverbs 4:23
Above all else, guard your heart, for everything you do flows from it.

3) Dont be scared to stand alone. Its better to learn to stand alone now (low threshold and all) because in the end, thats what its going to be.

Romans 14:12
So then every one of us shall give account of himself to God. (Empasis added by me).

To a generation of people with low thresholds for whats wrong. Cheers!

Posted from WordPress for Android

5 thoughts on “What’s your threshold?”

I was thinking of writing some deep qoutes😅, but honestly I'm just grateful for life and reasons to shine my "32" (I think i have just 30 sha😊).
Where are the men?!🔊🔊...Gather round.
What's it for you? The shades? The hair? The skin😊, or my lip gloss😂
Swipe👉👉
Do you know what purpose is? Do you know your purpose?
_I am fat! obese in fact. I checked my weight a month ago and the numbers that stared back at me made me shudder. I mean, I am basically just rolling around the whole place like an inflated ball.
Imagine walking into a store, picking up the items you need, getting to the cashiers desk and being told, "sir/madam, all the items in this store have already been paid for"
Change they say is the only constant in nature.
Smile, that big beautiful show of teeth.